Extracting 100% of Data From a Stubborn, Dying ZFS Pool

In 2010 I built a home server with five 2TB drives. It ran Solaris and ZFS for the redundancy and data checksumming to ensure no data could be lost or corrupted. Just 16 months later five 3TB drives were added to the pool. This computer took the 2600-mile trip to live in San Francisco with me. It then endured the 2600-mile return trip when I left.

Having sat unplugged for five years, I recently powered the server back on for new workloads. But relying on 10 ten-year-old hard drives in 2020 is asking for cascading failure. And not only were the drives old, they’ve experienced physical trauma. So instead I built a new server and endeavored to migrate the data.

During the transfer the drives exhibited consistent read failures as expected, but ZFS was able to transparently mitigate them. Occasionally, though, the pool would lock up in a way that could only be fixed with a hard reboot. These lock ups sent me on a weird journey of software and hardware orchestration to complete the data transfer.

During transfer of the data, progress would stall randomly in a way that seemingly could not be killed. CTRL+C had no effect. No kill signal had an effect. Even last-resort shutdown -r nows did nothing.

The system was oddly otherwise responsive. You could SSH in from another tab and poke around. ps showed that the transfer process was in the “D+” state which was uninterruptible sleep in the foreground.

That explained why the process wouldn’t die. The dmesg output also confirmed the problem happened deep in the I/O stack.

Visual inspection of the computer also showed anywhere from one to three drive LEDs were solid. None of the drive arms were moving to actually access data (the platters were still spinning).

If there was a way to recover from this state I could not find it.

The only way out of this state was a hard reboot which required holding down the power button. But after a reboot another lockup would occur randomly from within 10 seconds, to a few minutes in, to sometimes many hours later. Since I was only here to get data off of the machine, I did not want to spend a lot of time fixing the problem when a simple hard reboot was enough to unblock progress.

While seemingly random, I estimated a 100 hard reboots would be all that was needed. This meant progress could only be made during the day which increased transfer time from about 4 days to 10. Coupled with the restart time and then resuming transfer it looked more like 12 days would be required.

I decided this was unfortunate, but doable. I would work from my basement next to the machine which was hooked up to display on a TV. Whenever I noticed it was locked up, I would hard reboot the machine, wait for it to boot, and then resume the transfer by typing on its keyboard. In two weeks it would be over with.

After one day of working next to the machine I knew I needed to find a better solution. That day it had locked up 20-30 times which was triple what I had estimated for one day. Not only were the occurrences more frequent, but it took me a while to notice and using a keyboard attached to the server to restart the transfer was tedious.

In order for this transfer to complete with my sanity intact I needed to somehow automate the process. There were two problems to solve: figuring out when rsync was hung and performing a hard reboot.

Because rsync was stuck deep in the I/O stack there was no chance for timeouts to apply. Neither its transfer-based timeout or a timeout on the SSH connection would cause it to exit when hung. Even when I moved rsync to run from the new machine I could not get a timeout to trigger. Running on the new machine did allow killing the process, which was a start.

Since rsync wouldn’t exit normally, I decided to automate hung detection the same way I checked manually: monitoring the output. If the last two lines of the output (which show the current file and transfer progress) haven’t changed in 10 seconds we consider the transfer to be hung.

This script will now exit when the transfer is hung. I could now detect hangs by playing beeps or sending myself a push notification with curl on exit. Using this script on the second day meant that almost no time was wasted waiting for me to notice the transfer had stopped. I was still hard rebooting the machine and re-starting the script 20-30 times, though.

Last year I got a TP-Link Kasa Smart Plug as a stocking stuffer. I found a few sites which detailed how to use their undocumented API but while I was able to authenticate I was unable to toggle the power. Thankfully they have integration with IFTTT. I linked the plug and set up two applets which were each triggered by webhook.

I hooked the old server’s power through the plug and I could now control its power with two curl commands! 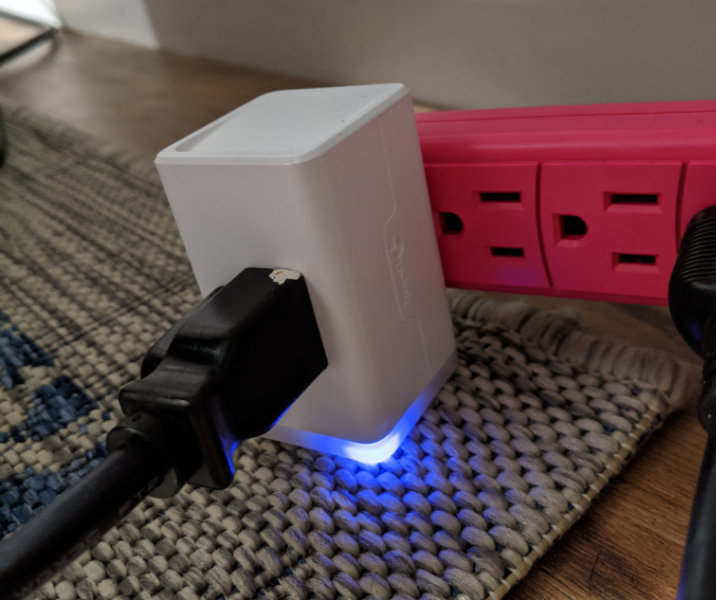 Integrating this into the script was a bit more complicated than expected. I started with a simple infinite loop running the above sync and then doing a power cycle with a delay.

After a few successful reboots the script would endlessly power-cycle the server or it would simply remain off. This was because IFTTT has no guarantees on latency or order of events. Instead of using sleep to time things, I switched to monitoring the actual machine for its state through SSH.

Now when IFTTT was delayed in delivering the power_off event the script would wait to confirm the machine powered off. This would sometimes spike as high as 10 minutes. But whenever it eventually triggered, 5 seconds later the power_on event would be sent and the machine would start coming back up. After 50 seconds it confirms SSH availability before restarting the rsync.

Sadly I didn’t capture a video of this in action. I did capture some of the output to excitedly share with some friends as they watched me go down this rabbit hole though.

I let this script run for two days and it managed to complete the transfer of all files. IFTTT reports that the power_on and power_off events were each triggered 151 times! A few hours of scripting and a $10 gift saved me from two weeks of doing this myself.

Had I known the drives would be so much trouble I would have taken a totally different approach. A better option would have been to run dd on the drives to copy their raw content to 2TB and 3TB files which would do a single pass across the platters. I think this would have been less likely to cause a freeze than the random access that rsync was doing. Then I could mount these files as storage on the new machine, import them as a ZFS pool, and do a local zfs send | zfs recv to get the data out.

I chose to use rsync over zfs send | zfs recv because I was unable to get a snapshot to complete before locking up. Once the initial transfer completed, I did a second pass using this script where rsync did a checksum of the file content on both ends (normally it only compares size and date). This found a few inconsistencies and re-transfered about 100GB of data.

Here’s the full script in its entirety: gist.github.com/JakeWharton/968859c48fd1bd7e85a0f78a164253b9. There are some additional features such as mounting the old ZFS pool as readonly on boot and using a third IFTTT trigger to update a push notification on my phone for the current item.

More on what this new machine is for in future posts. 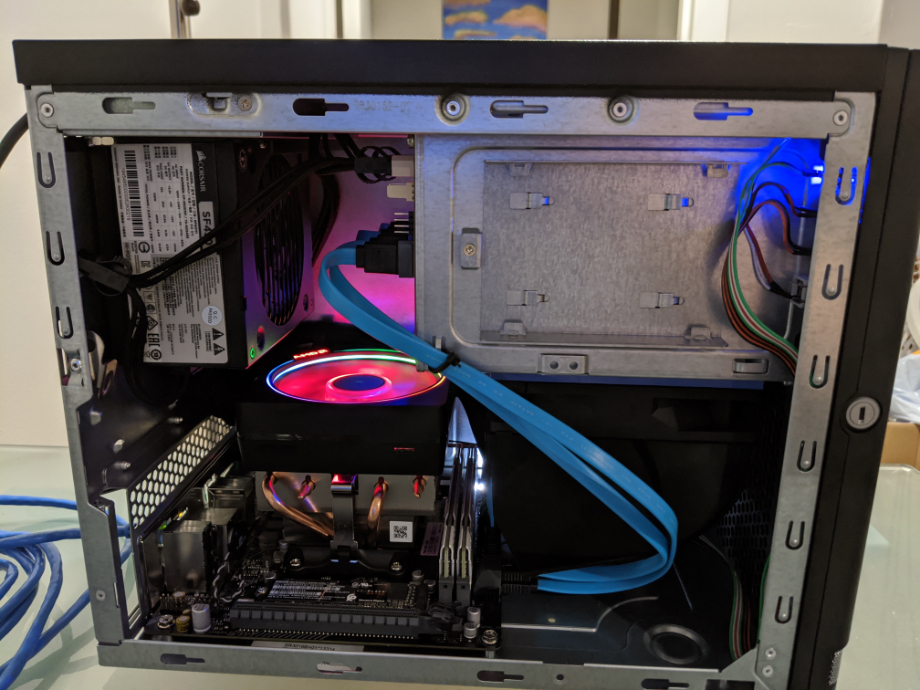