Earlier this year I built a web-based garage door controller using Rust for the Raspberry Pi called Normally Closed. My deployment includes a Pi 3b and a Pi Zero which are ARMv7 and ARMv6 devices, respectively. I deploy services with Docker and wanted to continue using it here for simplicity.

Getting all of this set up and working together was not easy. There’s also a lot of words in that title which might not mean much to you. That’s okay! This is the blog post that I needed two weeks ago, so let’s take a look at the steps required to accomplish this task.

In addition to the target, the linker needs to be changed since it otherwise will use the one from your machine and its architecture. This can be specified in .cargo/config:

On Ubuntu you can install this linker by running sudo apt install gcc-arm-linux-gnueabihf. On my Mac I was able to install it with brew install arm-linux-gnueabihf-binutils. (Despite using the musl compilation target, the GNU linker will still work.)

This is enough to compile working binaries!

I really like to make my binaries and Docker containers as small as possible. Once again Rust’s Cargo gives us a simple mechanism to achieve this in our Cargo.toml:

Setting opt-level to z instructs the compiler to favor a smaller binary size over performance. This will not be appropriate for anything CPU-intensive, but for a web server which will only see a few interactions per year we don’t require maximum performance.

Finally, the codegen-units setting reduces the parallelism of Cargo to allow compilation to occur in a single unit and be optimized as a single unit. This allows compilation and optimization to have the maximum impact by always seeing the entire program.

Having starting with only the Pi 3b and needing ARMv7, getting the build going in Docker was not too difficult. We basically just run the commands from above to produce the binary and then copy that into an Alpine container.

This container can be built with the regular docker build . command.

Adding a second architecture complicates things significantly. Docker does support containers which are built for multiple architectures through Docker buildx.

However, unlike the buildx examples, we cannot naively run docker buildx build --platform linux/arm/v7,linux/arm/v6 . and have it just work. For one, the Rust container is not available for those architectures. But even if it were, we still need to specify the custom compilation target per architecture due to our desire to use musl.

The first step towards making this work is having the Rust container always use the architecture of the machine on which it is running. This is similar to having run Cargo directly on our machine before, and it works because Rust is already allowing us to cross-compile to ARM.

The BUILDPLATFORM argument is documented as one which is available by default in the global scope of a Dockerfile.

With Rust always running on our host architecture we still need to vary the Rust target which is used for cross-compilation. Also present in the list of default arguments in Docker is TARGETPLATFORM which will contain either linux/arm/v7 or linux/arm/v6 in our case. We can use a case statement to determine the associated Rust target.

We write the value to a file since export does not work and there’s not really another mechanism for passing data between build steps. A read of that file replaces the hard-coded targets in the steps that follow.

The Alpine build stage also references the target in the source folder of the binary. Rather than worry about passing along the file which holds this value, an easy workaround is to copy the binary to a location which does not contain the target name.

The Alpine build stage can now remove the target platform and copy from the new location.

At this point we have a fully-working, cross-compiling, static-linking, multi-architecture Docker container built from Rust!

You can see the result reflected on the Docker Hub listing as compared to the latest release: 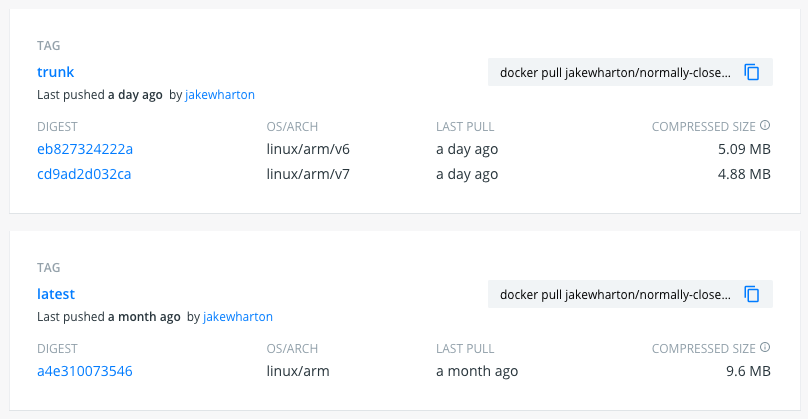 The full and final Dockerfile can be found here for reference. The repository also contains GitHub Actions setup for building the standalone binaries as well as the multi-architecture Docker container.

Hopefully this helps someone! It was a couple nights of piecing together all the steps for me. And hey if you have a garage door and a spare Pi lying around maybe try out Normally Closed!